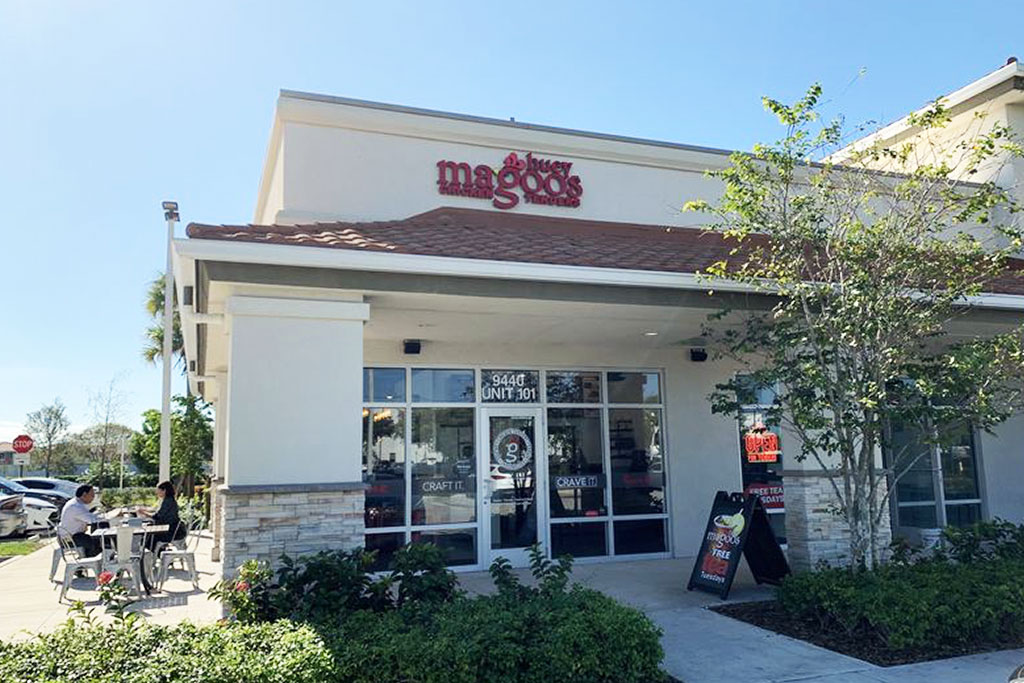 The first of five South Florida locations of Huey Magoo’s Chicken Tenders, a fast-casual chicken shack based in Orlando, debuted in Sunrise before the Christmas holidays. Father-and-son franchisees Bob and Tyler Cafferty are behind the South Florida restaurants, with future spots planned for Coral Springs this summer, followed by Fort Lauderdale, Boca Raton and Coconut Creek over the next few years.

Comfort food at the 1,875-square-foot eatery at 9440 W. Commercial Blvd., is handled simply, with a small menu of grilled, hand-breaded and sauce-smothered (or “sauced,” as the menu describes it) chicken tenders ($5.99 for three, $9.99 for seven). There are also nine dipping sauces, including the garlicky signature Magoo’s sauce, and orders come with crinkle-cut fries and a slice of Texas toast.

The DNA of Huey Magoo’s menu best resembles that of another South Florida-born franchise, PDQ, which also specializes in tenders, salads, French fries and sandwiches. But Cafferty says Huey Magoo’s has an edge over similar chicken-tender chains.

“We already know the food is great. Our chicken has zero antibiotics and steroids,” says Tyler Cafferty, 35. “So instead, we’re spending more time investing in people.”

Cafferty says he and his father know many of the Sunrise location’s 25 employees personally. For example, Bob says he hired Huey Magoo’s chef and assistant manager, Dennise Wilson, a graduate of Le Cordon Bleu culinary school, after working alongside her in a soup kitchen for seven years.

“Everyone is all smiles,” says Bob Cafferty, a semiretired business owner who once sold construction supplies in Deerfield Beach to retail stores and restaurants. “People love us already. We’re serving 175-200 tickets a day. One couple told us they loved we were open on Sundays, unlike Chick-fil-A.”

Huey Magoo’s play for South Florida marks an aggressive push for the 16-year-old franchise, started in 2004 near the University of Central Florida by friends Matt “Huey” Armstrong and Thad “Magoo” Hudgens. Armstrong and Hudgens sold the company in November to Miami Beach restaurateur Andy Howard, who previously grew the Kenny Rogers Roasters and Wingstop brands. Sunrise is the company’s 13th location in Florida and Georgia.

Tyler Cafferty says Huey Magoo’s next location, at Wiles Road and University Drive in Coral Springs, should open by summer.

As mentioned at Sun-Sentinel