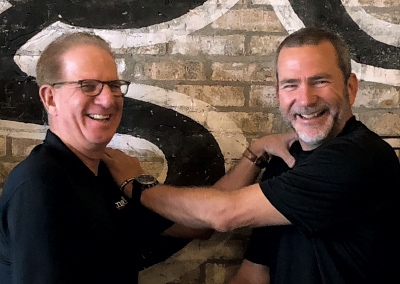 Huey Magoo’s is next venture for Papa John’s ‘zee

Dean Thompson ate more than 50 chicken tenders in five days during his visits to all seven Huey Magoo’s restaurants in the Orlando area but says he was already convinced it was the right brand for him before even trying the food.

“Andy had me sold over the phone,” says Thompson, referring to Andy Howard, the former Wingstop exec who’s been growing Huey Magoo’s Chicken Tenders since buying the brand in 2016.

After reading an article about Howard and the other Wingstop executives who brought their expertise to Huey Magoo’s, Thompson was impressed with the operational savvy behind the brand and felt it was an ideal complement to his portfolio of Papa John’s restaurants. Thompson, along with partners Derry Thompson and Alex Larson, signed a multi-unit development agreement to open an initial 10 stores in the greater Atlanta area, with the option to add 36 more. Working in restaurants most of his life, Thompson was on Papa John’s corporate side before taking over an Atlanta-area location in 1998 and eventually opening 10 more franchise units.

He considered some burger and Mexican brands before turning to chicken and says Huey Magoo’s is perfectly positioned for growth.

“It’s chasing after the younger market with the ingredients they use, the hormone-free, cage-free products,” says Thompson. “That’s what the younger demographic is after.” The salads with grilled tenders are another draw for consumers wanting a healthier option, he notes, and the counter-service concept is simple to operate.

Thompson plans to introduce the brand directly to Georgia consumers by inviting people in for free meals and believes once they taste the product, they’ll come back and spread the word. He pointed out he has tenured operators from his Papa John’s locations to help get the restaurants up and running.

“I know in my heart that this is a winner,” says Thompson. “Andy is a great operator and I know they have what it takes.”

As mentioned at Franchise Times