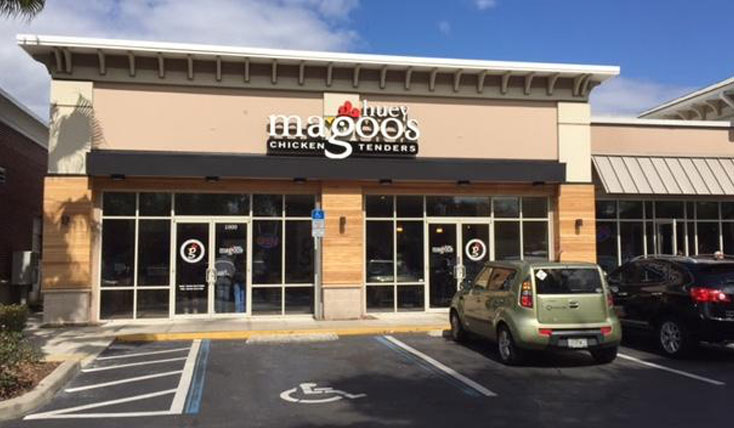 Huey Magoo’s, an Orlando-based fast-casual restaurant chain, is looking for more franchisees and locations after securing an area development deal for parts of Broward and Palm Beach counties.

Local franchisees Tyler and Bob Cafferty are expected to open the eatery’s first tri-county area store in 1,875 square feet at 9440 West Commercial Blvd. in Sunrise by June 2019. They have agreed to open five stores within the next five years between Yamato Road in Palm Beach County to the north and Commercial Boulevard in Broward County to the south.

“We think South Florida is going to be an exceptional market,” Howard said.

Howard, a Hollywood resident, is the former executive VP of Wingstop Inc., a publicly traded restaurant chain with about 1,000 locations. In May 2015, Howard purchased Huey Magoo’s when it had three locations from Matt Armstrong and Thad Hudgens, who remain partners and franchisees of the business.

Huey Magoo’s has seven total locations open in Florida and Georgia, with another seven stores expected to open this year. Its only corporate-owned store is in Lake Mary.

The chain has development deals in place for 50 more stores, Howard said.

Huey Magoo’s serves breaded and grilled chicken tenders with sides, on sandwiches and on salads.

As mentioned at Biz Journals